An Introduction to Bernini's Life

Born in 1598, Gian Lorenzo Bernini was a Neapolitan sculptor, architect and painter known as the figurehead of the Baroque style. He came to live in Rome in 1605 and  he worked for the most important and richest family of Rome, which allowed him to be successful very soon after his arrival. So he was not on the fringes of society or a dandy, but was on top of society and recognized by the dominant class. That's certainly why Louis XIV wanted him to come to France". As a matter of fact, Bernini spent some months in this country in 1665, and Louis XIV ordered some masterpieces from him: a bust, a portrait, an equestrian sculpture of Louis XIV himself (which was later transformed into the hero Marcus Brutus by French sculptors because the king didn't like the sculpture anymore!), and a project for the Louvre's colonnade - which was never completed. Thus, some of his creations have sometimes been underestimated in France, but he influenced many French sculptors like Puget, Duquesnoy or Coysevox.  He also influenced Italian artists who could see his masterpieces everywhere in Rome and in Italy: whether in churches, palaces, squares or galleries.

Furthermore, as we said at the beginning, Bernini is representative of Baroque style, because of the intensified movements and expressions in his sculptures, the different colors of the marbles used for architecture, yhe play of light and shades, ... But he's also recognized as the Master of " total art ", what it means that he wanted to mix all his talents in his creations, and that's a Baroque characterictic too. As a matter of fact he wanted to create total masterpieces only by himself, painting, sculpting and building. To illustrate this particularity, we could quote the church of Saint Andrew's at the Quirinal, built in Rome in 1658 - 1661 : Bernini created the external architecture - the plan, the exterior ornaments and façade - but also what's inside this church - golden decoration of the dome, circular elevation, marbled columns and Saint Andrew's sculpture situated at the head of the altar.

Furthermore we can say he's a total artist because he didn't always create the same sort of masterpieces but he used to renew them, changing the iconography, plans or ornaments. Indeed he built civil architectures  - some palaces like Barberini's Palace - and religious ones - Saint Andrew's at the Quirinal or the colonnade at Saint Peter's Basilica. Likewise he sculpted different kinds of sculptures : fountains - the Four rivers fountain -, religious sculptures - Saint Jerome, David or the Ecstasy of Saint Teresa -, mythological ones - Apollo and Daphne or the Rape of Proserpina -, funeral sculptures - the Tombs of Pope Urban VIII and Alexander VII -, busts - Pope Paul V -, equestrian sculptures - the Emperor Constantine - and decorative sculptures too - the canopy over the Papal altar at Saint Peter's Basilica. Concerning his paintings, he painted self-portraits -Self-portrait as a mature man -, portraits - Portrait of a boy - and religious ones - Saints Andrew and Thomas.

So we can say that Gian Lorenzo Bernini was a total artist, who almost gave his name to the 17th century's Baroque art. Gian Lorenzo Bernini was a " new Michelangelo "for the 18th century. Like the great Renaissance master, he was a sculptor, an architect and a painter. He was also the leading artist of this Baroque period and had a profound influence on artistic projects throughout Rome, as he worked under the patronage of the papacy.

He perfected the combination of architecture and plastic arts for the expression of resurgent Catholic devotion. His schemes were produced by a flexible workshop of artists and craftspeople working under his overall supervision. As a matter of fact he worked in and around Rome's principal site of pilgrimage for fifty years : Saint Peter's Basilica. The creation of tombs and altars, entire chapels and processional ways required a lengthy process of planning and manufacture.

This Italian artist almost single-handedly created high Baroque sculpture. His work in architecture, although more conservative, ranks him among the three or four major architects of the 17th century. The baldacchino was one of the works which made him a famous artist. It is a monumental canopy that covers the shrine of St. Peter. Made of dark bronze accented with gold vine leaves, it was sculpted from 1624 to 1633 by Bernini, under the direction of Pope Urban VIII Barberini, who oversaw the Baroque decoration of many masterpieces of Rome. The spiral columns derive their shapes from the columns in the original St. Peter's Basilica built by Constantine, and according to legend, they came from Solomon's Temple in Jerusalem. This baldacchino proves that Bernini kept creating in the Baroque style. Bernini's architecture was also inspired by the antiquity. Corinthian capitals, columns and marble were always parts of the architectural works of Bernini. His genius in architecture was to alternate classic art and innovations. The grave of pope Alexander VII is another blatant example of this. 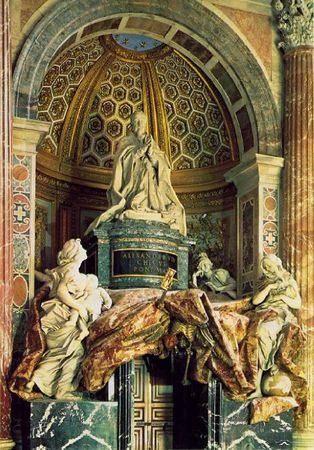 As we said at the beginning, Bernini was a magnificent sculptor too. We could illustrate this sentence by studying the famous Apollo and Daphne : This sculpture is one of his early works, made in 1623-1624. This mythological iconography is common, but the way he sculpted it and its meaning are different. As a matter of fact Maffeo Barberini (the future Pope Urban VIII), who had ordered this sculpture from Bernini wanted him to represant a moral allegory. This sculptuyre represents Apollo, who tries to catch Daphn but isn't able to get her because she changes into a laurel – which is the Apollo's sacred tree and is also an element of the Barberinis' coat of arms. So this moral iconography denounces unfaithfulness, which makes this sculpture really interesting. Furthermore what's particular in this sculpture is the fineness of the marble. We can see light through the fingers, leaves and hair of Daphne. So this sculpture is so interesting and magnificent that we could write a long  and endless description ! But the most important elements are : fineness, lightness, fluidity, virtuosity and beauty of this allegorical sculpture.